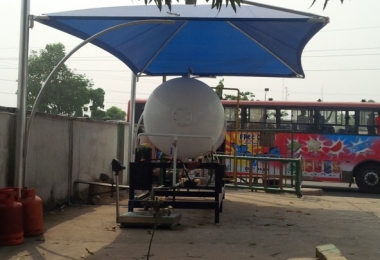 The federal government’s ambition to convert over 13 million Nigerian households to the use of Liquefied Petroleum Gas (LPG) for domestic purposes in five years, may suffer a setback due to controversy surrounding licensing of LPG skids for domestic purposes as well as for auto-gas.  At a time when Nigeria is exploring opportunities to deepen the penetration of LPG in the country’s energy mix through the National LPG Expansion Plan and the National Gas policy with dedicated input for the enhancement of the LPG sub-sector, stakeholders in the value chain have allegedly identified inconsistencies in the DPR’s licensing procedure as a major obstacle to achieve the industry’s objectives.  M&P Nigeria confirmed this allegation from a reliable source at the Petroleum Products Pricing Regulatory Agency (PPPRA) headquarters in Abuja, who informed this publication about a protest letter it received from LPG associations accusing the DPR of double standards in approving licenses for locating LPG skids at filling stations across the country.  According to the source who preferred anonymity, the contentious issue started when the DPR issued directives for the closure of what it described as unapproved LPG skids for violating stipulated requirements for operating gas facilities in filling stations. He noted that the DPR based its actions primarily on the fact that licenses issued for the establishment of LPG skids as Add-On facilities at filling stations were designated as auto-gas and strictly for vehicular use, which must be in compliance with the new LPG guidelines.  Auto-gas filling stations are filling stations that do not sell petrol, kerosene and diesel – but only sell gas to vehicles. The source, however, questioned the rationale behind the DPR’s premise that LPG skids at filling stations were designated strictly for vehicular use stating that there were too few auto conversion centres around the country, coupled with an absence of training for auto conversion expertise, a lack of incentives for vehicle owners to transit from petrol or diesel to LPG, as well as poor sensitization.  He highlighted other issues affecting consumption of the product which include lack of competitive pricing which does not reflect the true state of the LPG market in Nigeria; as well as sourcing, pricing, supply and distribution bottlenecks which need to be removed through collaboration between stakeholders and regulators.  On their part, LPG retailers reacting to the regulator’s claims accused its officials of being in a hurry to collect money to issue licenses only to turnaround and threaten to shut down their facilities and jeopardise their investment.  Spokesman of Cooking Gas Skid Proprietors Association of Nigeria (CGSPAN), Otunba Shittu Moshood, said the clampdown by DPR could signal a death knell for the planned legislation aimed at compelling petroleum product marketers to set up gas filling plants in all filling stations across the country. On his part, President, Liquefied Petroleum Gas Retailers Association of Nigeria (LPGARAN), Mr. Chika Michael Umudu, said regulation and safety standards in the LPG sector cannot be compromised in anyway.  He stated unflinching support for the sanitization of the sector but called on DPR to exercise restraint and take cognizance of the number of jobs being created in the LPG subsector, warning that a disruption in the activities of operators was capable of wiping out members’ huge investment and job growth target. The Agency did not respond to emails from our correspondent requesting information in this regard.